Say hello to one of my many jabberwockies! This fellow can be found doing his creepy thang in Book 2 of the Dreamer trilogy.  He can’t wait to meet you.

Todd’s mom hadn’t believed him when he told her that there was a circus in the cow pasture. She’d looked up from her laptop, lips thinned with annoyance, and said, “Quit pestering me and go back outside and play.”

He reached the top of a rise and the words died in his throat. There it was below him: a large red and white striped circus tent. A jaunty blue pennant adorned its pointed top, seeming to wave hello at him on a puff of playful spring air.

Around the tent danced twelve clowns, who appeared to be connected to it by thick red and white striped ropes. They wriggled and cavorted to bouncy calliope music. The gentle breeze carried faint scents of popcorn and sawdust to Todd’s nose, and he grinned.

It wasn’t an entire circus, that much was obvious. There were no booths, no bustling workers, just the lone tent and its dancing clowns. Perhaps the main tent had arrived first, thought Todd, and the rest of the circus was still on its way. Circuses were chaotic things. It was probably hard to keep everyone together when traveling between towns. Why they’d chosen the cow pasture out back of his house was a mystery, but a thrilling one.

Todd trotted down the hill, imagining the circus workers asking him to help set up. He pictured himself sweeping out elephant pens and being rewarded with a ride atop one of the wrinkly beasts. If he impressed the workers enough, maybe they’d even let him be in one of the performances!

The closer he got, the more excited the calliope music sounded, skittering from cheerfulness into deranged glee. The dancing clowns became more frenetic, leaping and prancing and whirling, somehow never getting tangled in the thick red and white ropes that connected them to the tent. Now that he was closer, Todd could see that those ropes were curiously heavy, slithering along the ground with the meatiness of big snakes.

The smell of popcorn was stronger now, and also odder, something about it too buttery and rich. Ultra-popcorn. Popcorn concentrate. Todd grinned and waved at the clowns as he neared them, shouting, “Hi there!”

The clowns did not answer. Their big, enthusiastic smiles neither widened nor faltered.  They wiggled like excited puppies.

By the time Todd was close enough to see that their eyes were lifeless and blank, it was too late.

Six of the clowns surrounded him, dancing their silly, hopping jigs into a tight circle with Todd at the center. The smell of popcorn was overwhelming, nauseating. The clowns faces were wrong, as empty of personality as thumbs.

He tried to break away, but the clowns had formed an impenetrable wall of brightly colored meat. That’s all they were, he could tell that now. Not people. Meat.

One of the red and white umbilical cords that connected the clowns to the tent lifted a clown into the air and slammed it into Todd like a croquet mallet. He tumbled backwards towards the entrance to the tent, regained his feet, and tried to scramble away. Another striped tentacle raised its be-clowned end into the air and bashed him with such force that he flew into the side of the tent.

The flaps that formed the entrance of the tent parted like lips, revealing concentric circles of needle teeth, coated in black, popcorn-scented goo. The calliope music coming from the hole at the center of the rings of teeth was considerably louder now, screechy with triumph. The monster’s clown-tipped arms swept the wailing little boy-morsel into its mouth.

The tent flaps fell shut with a satisfied smack. The clowns on the ends of its tentacles went limp, flopping onto the ground, as the beast relaxed and enjoyed its meal. After several minutes, the flaps of the tent puffed outward slightly on the warm breeze of a burp that smelled like blood and popcorn. 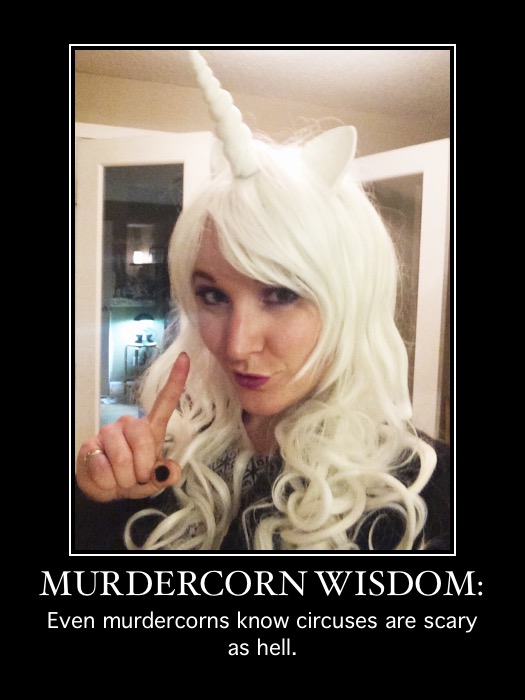 2 Responses to “The Circus Tent Monster”