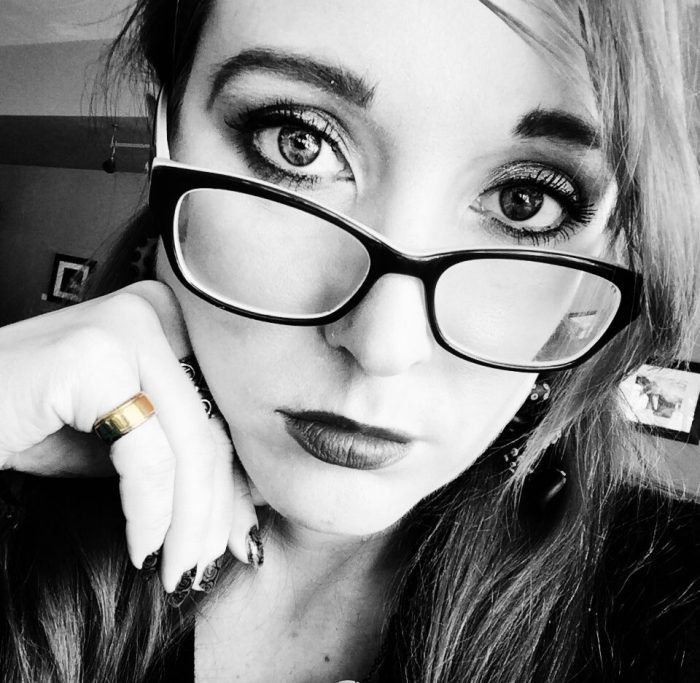 Welcome to Walking the Ghost Path, my new series about the strange things that have happened to me and others since I decided to overcome the trauma of my father’s suicide.

Don’t miss Part 1: My First Shameful Confession, in which I admit I have a brother whose existence I hid from the world. A brother I abandoned.

The closest I’ve ever come to encountering a ghost was when the ocean ate one of my only remaining connections to my father.

This isn’t a spooky story, but it is a haunting one.

My dad killed himself when I was seventeen. Life was not kind to him. It systematically broke him down until he couldn’t bear to exist anymore. I watched him erode, helpless to stop it.

I have very few of his belongings. There is almost nothing left on earth to physically link us together. The object that’s most important to me is the wedding band he gave to my mother when they got married (they divorced when I was a toddler). The ring might not have been his possession, really, but it has come to embody my only remaining connection to him.

For me, the ring symbolizes a time when my dad’s life was full of hope and happiness, a time when his future was bright with possibility. I cling to this ring. I never take it off. There is nothing I own that matters more to me.

When I was in my early twenties, my mom wanted professional photos taken of me and my sister. It was a very windy, chilly spring day. We stood on the photographer’s deck over the ocean, arranging our bodies and our smiles at his direction. We were outside for so long that my fingers shrank from the cold.

The wind whipped my hair into my face, and as I reached up to brush it from my eyes, the ring fell off of my pinky, bounced across the deck, and dropped through a hole in the boards into the ocean.

I was utterly devastated. It felt like I had lost my father all over again.

We searched for the ring, and so did the photographer, over and over again in the coming days and weeks. Countless times, I scoured the ground when the tide was out, but the ring was gone, swallowed up by the sea.

Eventually, I had to give up, but I was acutely aware of the loss every day. My hand didn’t feel right without that circle of gold around my finger. Until the ring was gone, I didn’t realize that I’d touched it constantly, unconsciously; that I twisted it around whenever I was thinking; that I rubbed my pinky finger against my ring finger when I was nervous or irritated.

My mom gave me a delicate wooden ring my father had carved for her when they were high school sweethearts, but it wasn’t the same. It was too fragile to wear, too inert. Just an object, not a link.

About ten months later, I got a call at work from the photographer. He told me that he had no idea why, but a sudden urge had swept over him to search for the ring one more time. He went outside, looked down, and there it was, glittering on the ground amid the rocks and seaweed and mud and detritus.

As he spoke, every hair on my body stood up. A cold feeling rushed through me. I glanced up at the calendar, did some calculations, and realized it was the anniversary — almost to the minute — of the last time I ever saw my dad alive. The anniversary of the day he gave me his most precious possessions, and said goodbye to me forever.

I was overjoyed to get the ring back. But I didn’t anticipate how much pain it would bring with it.

I’ve been an atheist and a skeptic since I was a little girl. In the very marrow of my being, I’ve always felt with stone cold certainty that we snuff out like candles. That when we die, our light does not become something else, but vanishes entirely. Like all faith, I struggle with my beliefs. I yearn for the comfort of knowing there is something else for us after death. I want more than anything to feel that the people I’ve loved and lost are not gone from me forever. But that never feels like truth to me.

Hearing these things tormented me. My desperate desire to believe this was true always collided with my unshakable conviction that when we die, we are gone entirely and forever. And with each collision, I felt a little more crushed.

That hurt has faded over time. My skepticism is flavored with a small dash of agnosticism now. I love hearing other people’s stories about interactions with the supernatural. I even envy them. I can’t shake the feeling that if there is something after death, it will never reveal itself to me, specifically because I want so badly to see it.

The other thing that’s changed is how I feel about people’s reactions to the story of my ring. I like when people hear it and tell me they believe the ocean gave it back to me as a message from my father. I can’t really believe it myself, but their conviction is like a little flame, and its warmth comforts me.

This weekend, I found the book of proofs from the doomed photography session. I’m so excited to have this artifact from a day that’s played a critical role in my journey to heal.

The pictures capture our transition from happy-go-lucky to stunned anguish:

The moment before I lost the ring: 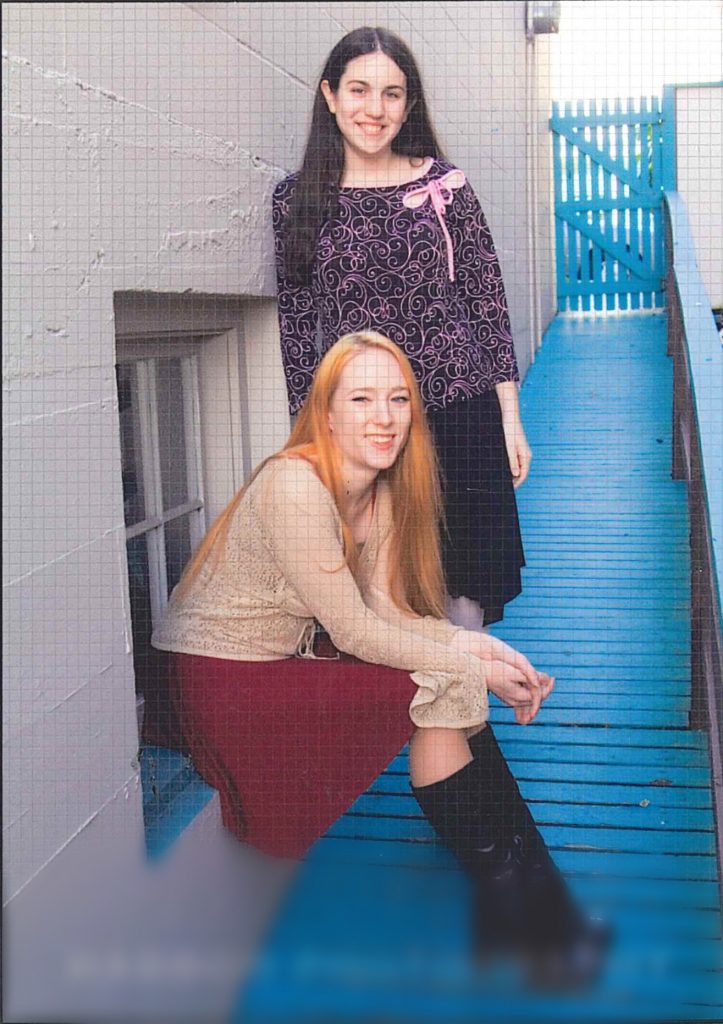 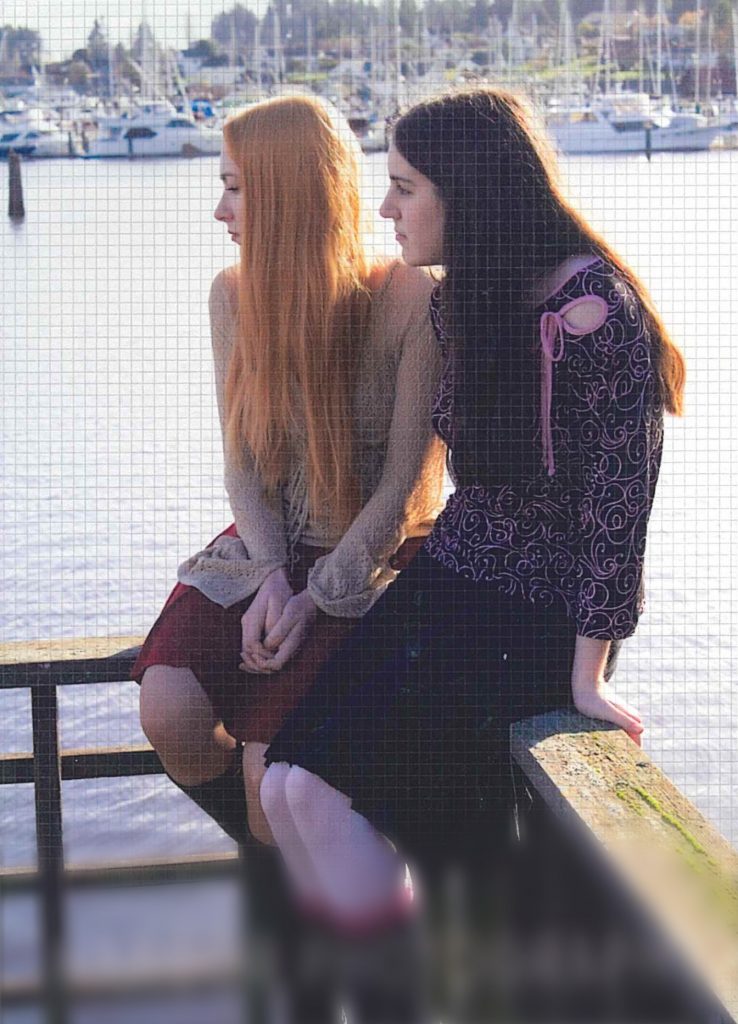 This is me attempting to smile. No, really: 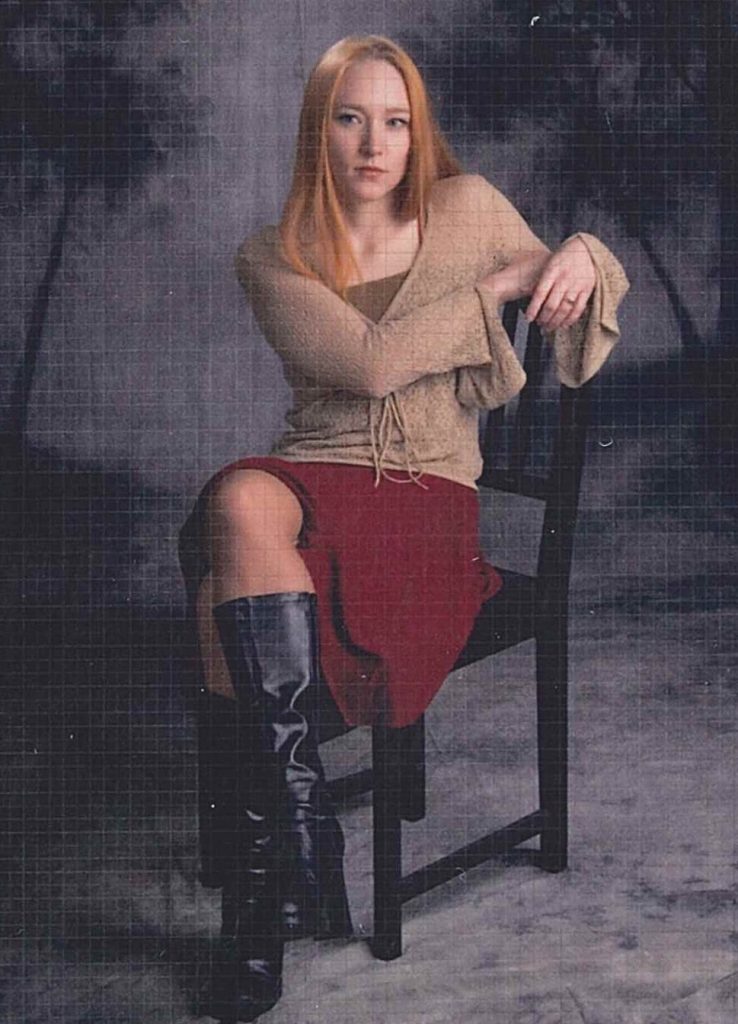 (Before I write another word: Oh my gawwwd, CHECK OUT MY PANTYHOSE! Those hideous orange things make it look like I borrowed Donald Trump’s legs for a day.)

Yesterday, someone asked me why we even attempted to finish the shoot after I lost the ring. If I recall correctly, the photo session was a birthday present for my mom, and I didn’t want to ruin her gift.

Sadly, the gift was ruined anyway, because every picture was tainted by what happened. We ended up never purchasing anything from the session — my mom and I always felt bad about that every time we came across the proofs. The photos are truly lovely.

I am very happy to report that when I found the proofs, I was able to track down the photographer. We only had a brief exchange, because he’s on vacation, but my mom and I intend to take him out to a very nice dinner. I can’t wait to pick his brain and learn what he remembers — and, of course, to tell you all about it.

My therapist has circled back to the story of my ring over and over again throughout my treatment for PTSD. In particular, she has focused on how much pain I felt whenever anyone told me that the ring was obviously a message from my father.

I was lacerated by the conflict between my conviction that there’s no afterlife and my yearning to believe the people I’ve lost still exist in some form, watching over me. My therapist hasn’t tried to change my faith, but little by little she has healed my wounds by teaching me something important:

It doesn’t matter if you believe in ghosts or an afterlife. Belief isn’t necessary for solace.

My therapist encouraged me to start talking out loud to my dad and other dead loved ones. It felt incredibly silly at first. I only did it when I was alone, but that didn’t stop acute embarrassment from making me squirm.

And then things began to change.

Gradually, I felt less silly, even though I still didn’t believe there were dead people listening to me. Just imagining they were with me when I spoke out loud began to soothe me.

I now understand that there’s not much difference between imagining ghosts exist and being certain ghosts exist. When you imagine someone is with you, they are with you. They’re alive in your mind, and that has a truly profound power.

Once I realized this, life started getting spooky.

Like the ring coming back into my life at such an improbably significant moment, coincidences that thrum with almost supernatural power keep shaping my journey down the Ghost Path.

The pain of hindsight:

Before updating this post, I first reread what I’d written about losing the ring. Though I published the story on my website in 2014, I actually wrote the text several years before that, sharing it in a variety of places on the internet.

Now that I’ve written about cutting off contact with my brother, I am pierced by my tragic focus on physical objects. For years, I viewed a stupid ring as my greatest — if not only — connection to my dead father. Not once did I recognize that my brother Max is the most powerful and important link to my dad in existence.

It’s heartbreaking to look back at all the time I could have spent with my brother and my stepmom. I squandered so much life and emotion on a tiny piece of metal. I know my dad would never have wanted this for me, or them.

I’m not the only person on the Ghost Path who’s clung to physical objects instead of family, losing time that’s far more precious than our belongings could ever be.

Up next: a long lost family member, a stolen inheritance, some unexpectedly important avocados — and, of course, another goosebumpy coincidence with life-changing power.

Don’t miss a single step down the Ghost Path!