Warning: Use of undefined constant GOOGLE_ANALYTICS_ID - assumed 'GOOGLE_ANALYTICS_ID' (this will throw an Error in a future version of PHP) in /home/customer/www/saraamundson.com/public_html/wp-content/themes/sara-amundson/lib/scripts.php on line 70
 The Hair Monster - Make a Monster - Sara Amundson

Suede had suffered from alopecia universalis since he was a child. He was bald as an egg from top to bottom–and one of the best hair stylists in the city. Nothing gave him greater pleasure than working with and being surrounded by hair. Almost every night, he was visited by lovely dreams of floating on an undulating, silky ocean of tresses in every color imaginable.

The salon was especially busy today. The gabble of clients chatting with their stylists bounced off the tiled walls and floor, masking the growls coming from the supply room until it was far too late.

The slaughter started with a handlebar mustache.

It sprouted out of the face of a fifteen year old girl, flowing down from her upper lip with cartoonish speed. Her blue eyes went wide with surprise at the astounding transformation captured in the salon’s big mirror, and then bulged as the mustache wrapped around her throat, squeezing it like a python.

The receptionist shrieked, her jeans splitting apart, torn asunder by an explosion of leg hair. Within seconds, the air was crowded with screams. Rivers of hair poured from scalps. Eyebrows grew into bushes. Floods of wiry armpit and pubic hair ripped clothing into unseemly shreds. Eyelashes became ropes, twining through bangs above and beards below, pulling people’s eyelids apart, ensuring they would be unable to look away from their impending dooms.

Within a minute, like flies caught in a spider’s web, every person in the room was held fast in a mesh of hair that crawled up the salon’s walls and ceiling. Every person except Suede and the poor, purple-faced girl on the floor who’d been choked to death by a mustache.

Suede spun in a circle, dazed, his mouth dangling open in shock. The screams had quieted, muffled by beards and mustaches. The growling in the supply room was very clear now.

He looked down, jumping in surprise as all of the hair clippings on the floor began shivering like metal filings responding to the call of a powerful magnet. They skittered across the tile in a multicolored mass, throwing themselves at the being that stepped out of the supply room.

It was an eight foot tall mound of hair. The monster was almost comical, really. It looked like it could have been a character on Sesame Street. But there was nothing comical at all about the black hole lined with teeth that appeared in its center.

Dozens of dreadlocks shot out of its sides, wrapping around the corpse of the mustache victim. The hole in its center widened to accommodate her body, and the hair-beast swallowed her with a satisfied grunt.

Suede understood that his death was near, but for some reason, he felt completely calm. And full of envy. Why couldn’t he have grown hair too? If he had to die this way, why did his stubborn body have to deny him the blessing of the monster’s hirsute magic?

He dashed tears from his eyes and the movement caught the monster’s attention. Even though the hair-pile seemed to have no eyes of its own, Suede could tell it was examining him closely. The top of the hair monster bent to one side and then the other, just like Suede’s dog cocked her head when she was trying to understand something. Perhaps it, too, did not understand why its magic had failed. Two ridges appeared above the mouth-hole, drawing together like eyebrows frowning over a puzzle. Suede felt its concentration boring into him.

A strange tingling sensation prickled his scalp and over browless eyes, and then spread all over his body. As Suede finally began growing hair, he tipped back his head, his mouth curved into a smile of perfect joy.

He opened his now-fuzzy arms and gladly embraced his fate. 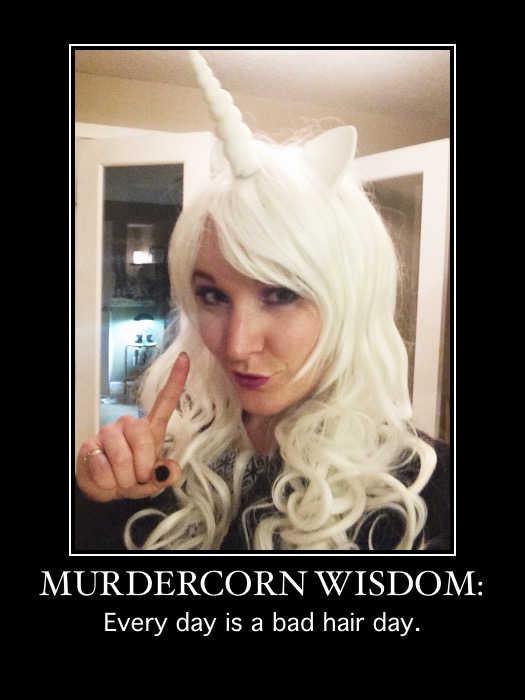 One Response to “The Hair Monster”