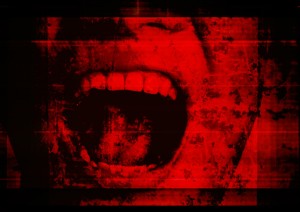 Will liked to people-watch while waiting for the bus to come. For most of his life, watching had been his only option. He’d been born into a world of perfect silence.

Cochlear implants had changed that, substituting his missing sense with clever technology — but he still preferred using his eyes to drink in everything around him.

As always, everyone at the bus stop was glued to their phones and tablets, their necks bent and their shoulders hunched. Will wondered if this era of smart phones and terrible posture was a chiropractor’s paradise. Besides him, the only person not staring fixedly at a device was a teenager who was using her phone to listen to music. Her head bobbed to the tune flowing into her skull through glittery pink earbuds.

A phone rang, and a woman sitting on the graffiti covered bus stop bench paused the bleeps and bloops of a game to take the call. She was very loud. “Hey, Amanda, what’s up? What? Are you fuckin’ shitting me? That bitch swore on her mother’s grave she was gonna pay me back! You tell her I’m coming over there and kicking her ass if she doesn’t have what she owes me.”

Will wondered why people who took calls in public always spoke so loudly. It didn’t seem to have anything to do with overcoming ambient sound; it was more like an instinctive rudeness. Shaking his head, he turned away to watch the flying fingers of a young man texting with astounding rapidity.

When the first shriek ripped through the air, Will assumed the woman on the bench had ascended to even greater heights of excessively loud rage over her missing money. He turned around to shoot her an incredulous look, just in time to see the man sitting on the bench next to her fling his iPad to the ground. The tablet was howling like a demonic wolf.

Then, a shrill scream of agony and terror began pouring from the angry woman’s phone. She held it at arm’s length, her eyes bulging with confusion and alarm. The teenage girl added her own voice to the din, screeching in pain and yanking out her ear phones as if they were on fire. A banshee wail yowled out of the little plastic buds at an incredible volume.

The receivers of Will’s cochlear implants began to caterwaul like babies being boiled alive. He fell to the ground, clutching his head. It felt like it was about to explode.

Within seconds, every device in the vicinity was screaming. It was an ear-splitting, serrated sound that obliterated the ability to form rational thoughts. People writhed on the ground as it sawed through their skulls.

No one was capable of running when the terrible creature emerged from a nearby alleyway.

It stomped toward them on stout legs made of broken electronics — printers, computers, TVs, game consoles, phones, tablets, stereos, DVD players, fax machines — held together by tangles of pulsating cords. Its massive body was covered with tumorous, throbbing black speakers.

The screams increased exponentially in volume as it lumbered toward the bus stop. A convenience store’s windows shattered as it passed by them. Some of the flying blades of glass hit Will, slicing into his legs. A man’s spectacles exploded too, sending shards deep into his eyes. His body went still while everyone else continued to flop on the ground, helpless against the relentless assault of sound.

Two televisions sat atop the beast’s body, displaying images despite their cracked screens. The twisted faces of people howling in terror flickered on and off, sometimes momentarily replaced by eyes that glowed with a cool, digital green light. Its arms were dense ropes made of hundreds of intertwined power cables.

The cables snaked outward, wrapping around the ankle of the teenage girl who’d been listening to music before the madness began. The bulbous speakers in its torso split apart to reveal the metal teeth of an enormous document shredder. Clouds of blood filled the air as the girl’s body was transformed into thin ribbons of meat. The boom of the monster’s burp rattled Will’s bones.

The cables reached out again, plucking up a woman writhing a few feet away from Will. Her body made a wet grinding noise as it went through the shredder.

Some small part of Will — the part that had given him the strength to navigate life with a disability — blessed him with one fleeting second of mental clarity. He was far too injured to run, but he could make himself deaf.

Will yanked the cochlear implants’ receivers from his ears. If he was going to die, he wanted it to happen as he’d been born: in the embrace of silence.

5 Responses to “The Scream Beast”